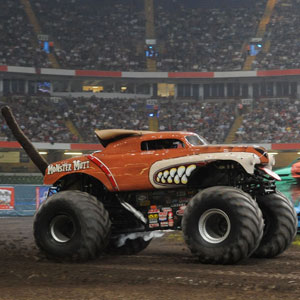 Monster Jam packs them in at Cardiff venue

In the end it came down to a sudden-death choice for the judges between Maximum Destruction and Monster Mutt, but the near 40,000 Monster Jam fans who packed into the Millennium Stadium at the weekend weren’t too worried about who took the Freestyle title on another amazing night at the capital of Welsh sport and entertainment.

They had just seen 40 cars totally destroyed by the 12 Monster Jam trucks and a level of entertainment that brought smiles to the faces of both young and old. Having won the Monster Jam Racing category earlier in the night, driver Tom Meents was more disappointed that he failed to turn everything in the stadium to rubble before his time was up in the Freestyle event.

Maximum Destruction did everything it said on the side of its massive frame by destroying all in its path. While Meents obviously enjoyed his 90 seconds of Freestyle wrecking time, the 38,749 crowd simply adored it.

“There is no doubt that the first show of the 2008 Monster Jam Europe Tour was full of energy and action packed from start to finish. Quite simply, when you combine top quality drivers and an unbelievably challenging course, there is simply no other motor sports event on the planet that brings fans to its feet like Monster Jam,” said Darren Pallen, the Monster Jam announcer.

“Once again, it was mission accomplished for the fearless Monster Jam Europe drivers and their five thousand kilogram trucks. The fans in Wales could not have left Millennium Stadium any more pleased.”

The Autograss and Rally Cars also grabbed the headlines with some sensational racing, and the odd spill, while the Freestyle Motocross riders provided some jaw-dropping moments with their dare-devil stunts.

Czech star Martin Koren defeated his fellow competitors with an absolutely stunning Super Flip and the FMX Train Finale had the crowd on its feet in admiration.

But the biggest cheers and rounds of applause were quite rightly kept for the Monster Jam racers and their special brand of action.

“The crowd was fantastic and the reception the fans gave the drivers was awesome. No wonder the Monster Jammers want to come back next year,” said Millennium Stadium Manager Gerry Toms.

“It is spectacular entertainment and the age profile of the crowd ranged from three years upwards. It really is great family entertainment.

“The organisers sold hundreds of tickets for the 2009 event within a few hours of the gates closing and yet another motor sport event at the Millennium Stadium has become an annual spectacle.”

Monster Jam 2008 was the 15th major motor sport event hosted by Millennium Stadium and the crowd last weekend took the number of fans that have passed through the gates to more than 400,000 since 2001.

It was the British Speedway Grand Prix that kick-started the stadium’s involvement in motor events and this month will see the world’s top speedway riders return for an eighth time on Saturday, 28th June.

The seven speedway Grands Prix have attracted 235,204 fans to date, while Monster Jam is now second on the attendance list with 78,749 from two events. Rally GB, which returns before Christmas, has brought in 72,500 fans to three meetings, while there were 29,000 tickets sold for three Supercross events.

“The Millennium Stadium was always meant to be a multi-purpose facility and motor sport events have become part of our core business in recent years,” added Toms.

“The stadium, the city and the fans all deliver in a major way to the event owners and we have now established Cardiff as a hot bed of motor sport activities.”

Eager fans snapped up twice as much Monster Jam merchandise as they had done in the first year and the spectacular event looks like running and running at its new Welsh base.

There are special offers on tickets for next year’s event if bought in June 2008 and full details are available from:
Monster Jam tickets from the Ticketmaster website, Click Here for details or telephone 08705 582 582
Adults from £15 in June, Children from £5 in June