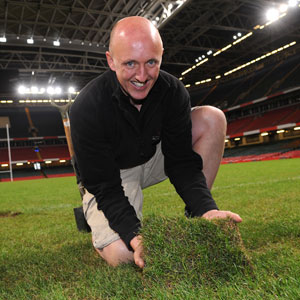 Historic turf up for sale

The green, green grass of one of the most important homes in Wales could soon be growing in your own back garden.

The historic scenes which formed the climax to Warren Gatland’s unbeaten debut season in charge of the national side in 2008 will live long in the memory, but fans can now own a piece of Grand Slam history for themselves.

The grass, which provided the backdrop for Wales’ victory over France to clinch their second Six Nations title in four seasons, was taken up this week to enable the Millennium Stadium to host this weekend’s Monster Jam event and is currently being stored at the headquarters of turf suppliers Inscape in Bridgend.

Rather than let the famous turf wither and die, the Welsh Rugby Union has decided to give fans the chance to purchase a piece or more to provide them with a constant reminder of the glorious 10th Grand Slam in Welsh rugby history.

Each one of the 5,000 units of turf come packaged in a special presentation box, complete with marker flag and a certificate of authenticity signed by the man with midas touch himself, coach Gatland.

“Ordinarily the turf gets ripped up and discarded, but we just didn’t have the heart to do that after such an historic year for Welsh rugby,” explained WRU Head of Marketing Gwyn Dolphin.

“On this occasion, as happened with 250 metres of the famous field on which England were beaten at the start of the 2005 Grand Slam campaign, we thought it would be nice to offer fans the chance to buy a piece for themselves.

“Each piece, which measures 180mm x 250mm, comes in a special box and will be able to be laid somewhere in anyone’s garden. It is something you can boast about to your neighbours over the garden fence.

“The other good thing is that by offering the turf for sale to fans it means that the money raised can be pumped back into the grass roots of Welsh rugby to help nurture the next generation of Grand Slammers.”

To buy a piece of turf all you have to do is logon to www.wru.wales/wru-store/ with each gift box retailing at £19.99 plus post and packaging.

Millennium Stadium groundsman Lee Evans says fans who buy the gift packs should quickly be able to assimilate the Stadium turf with their own gardens.

“The gift boxes have been specially designed to keep the turf moist so it should arrive with fans in a good condition,” said Evans.

“All you have to do next is lay it in your soil and give it plenty of water and before you know it you’ll be the proud owners of a unique piece of Welsh rugby history in your own back yard.

“Make sure you water it in, it’s very important not to let it dry out because that may cause it to shrink and it will then be difficult to get it back, but there should be enough fertilizer in it to keep it going so just lots of water will do the trick.

“Once it beds in it should last a lifetime, but the important thing is the early days of its life in your Garden and making sure it takes.

“The only problem gardeners may have is that the grass will probably not keep in its current storage state for more than a month. So fans who want a piece of the Millennium Stadium’s Grand Slam pitch should purchase quickly to avoid missing out.”