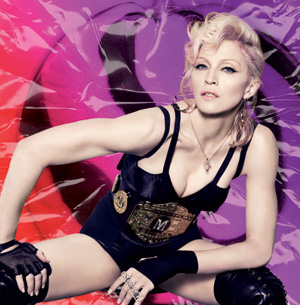 Following the latest news news that ‘HARD CANDY’ has debuted at No.1 around the globe, it has been confirmed that Madonna’s ‘STICKY & SWEET TOUR’ will begin (hip) hopping around the world on August 23rd in Cardiff, Wales with stops in major European markets through September including London (11th September) and Paris (20th September).

TICKETS ON SALE 9AM FRIDAY MAY 16th

The U.S. leg of the ‘STICKY & SWEET TOUR’ begins October 3rd at the Izod Center in E.Rutherford, New Jersey, with stops at NY’s Madison Square Garden on October 6th and 7th, followed by performances in Boston, Chicago, Los Angeles and more before stopping at Miami’s Dolphin Stadium on November 26th. Madonna’s STICKY & SWEET Tour will also visit Mexico and South America later this year. (Show dates, and on sale information in these markets will follow at a later date.)

Confirmed today by Guy Oseary, Madonna’s manager and Arthur Fogel, CEO Global Touring and Chairman Global Music, Live Nation who is producing the tour, Sticky & Sweet will play arenas and stadiums throughout Europe and North America including a number of cities where Madonna has not performed in the past fifteen years.’STICKY & SWEET’ will be directed by Madonna’s long time creative collaborator Jamie King. The musical director will be Kevin Antunes. The complete tour itinerary is listed below with additional cities and dates to be announced. For complete tour and ticket information, fans can visit: https://www.livenation.co.uk/ & https://www.madonna.com/.

A multi-Grammy award winner and recent inductee into the Rock and Roll Hall of Fame, Madonna has long been known for groundbreaking multi-dimensional tours that consist of visual and audio extravaganzas with non stop singing and breathtaking dancing. Madonna’s last outing, 2006’s acclaimed Confessions Tour played in 25 countries including Moscow and reached a collective audience of over 1.3 million fans and was the highest grossing concert tour of all time by a female artist.

Tickets for “Sticky and Sweet” will go on sale beginning Friday, May 16th in London, Paris, Cardiff and Nice followed by on sales Saturday, May 17th in Amsterdam, Boston and Chicago with E. Rutherford and New York City on sale Monday, May 12th. Tickets will range from $55.00 through $350 ($375.00 in Las Vegas) offering a variety of excellent seats at all price levels. Additional on-sales vary and are listed below or available at https://www.livenation.co.uk/ & http://www.madonna.com/ . There will be a 4 ticket limit per person at the arena performances and a 6 ticket per person limit for stadium events.