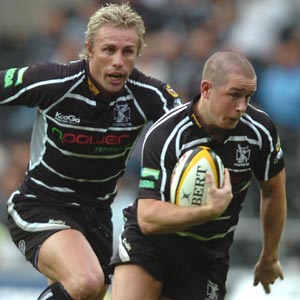 Shane Williams will gather his Grand Slam winning teammates for a clash-of-the-titans meeting with All Black legend Justin Marshall’s invitation world XV at the Millennium Stadium on Saturday 17th May (KO 1.15pm) to cap off his ‘greatest year in rugby’.

Williams has celebrated his 2008 testimonial season in style so far by becoming Wales’s all-time top try scorer and picking up the RBS Six Nations man of the series award to go with his Grand Slam and EDF Cup winners medals – and the Ammanford United, Neath, Ospreys, Wales and British Lions wing is now set to reach his career climax against an impressive team of ‘Galacticos’ gathered by Ospreys stable-mate Marshall.

Warren Gatland will coach Shane’s all-conquering team in a final match-up on home soil before they depart to take on the World Champions Springboks in South Africa for a two-test tour in June and he will pit his wits against a Marshall side which will be littered with the names of living legends wherever you look.

‘Shane’s Game’ is just one of the highlights of a festival day for Welsh sport at the Millennium Stadium which starts with the DC Thomas Cup final at 12 noon, followed by Shane meeting Justin at 1.15pm, before the 2008 Konica Minolta Cup Final Kicks off at 6pm.

Two from Aberavon, Pontypridd, Neath and Glamorgan Wanderers will meet in the Konica Minolta Cup Final, with the Welsh All Blacks facing Wanderers this Sunday and Aberavon up against Ponty on Saturday in semi-final clashes.

“It’s been an amazing season, far and away the greatest year in my rugby career,” said Williams. “I reached some personal milestones and have achieved more than I could ever have hoped, but the highlight has been able to share memories with my team mates at both Wales and the Ospreys.

“I would like to thank the Ospreys for granting my testimonial year and the fact that I’m able to put this game on is a really humbling experience for me, especially at the Millennium Stadium.

“I’ll be surrounded by world rugby superstars, but many will be close friends and team-mates and the match should be quite a spectacle. I don’t expect us to be knocking seven bells out of each other, but you can’t put that much rugby experience and professionalism on a pitch without there being a competitive edge.

“We will be confirming team line-ups over the next few weeks and I don’t exactly know who I’ll be lining up against yet, but I fully expect Justin to be telling his team-mates to be keeping me away from the try-line.

“They’ll see it as a challenge to not let me in and I’ll relish the challenge, there should be plenty of spectacular tries scored and just hope I can cross for one of them!

“In all seriousness the fixture comes just before Wales depart on the summer tour of South Africa, we will be going to the home of the World Champions and I’m sure Warren Gatland will be taking a keen interest in what he sees. Warren will be the first to let us know in the dressing room at half-time if we aren’t playing to our own high standards!

“I’ll be asking my team to play my way, which should make us an exciting prospect, but you don’t get as many caps for the All Blacks as Justin has got without having something of a competitive edge about you either so we’re all very much looking forward to the experience.”

Access to the Konica Minolta Cup final, ‘Shane’s Game’ and the DC Thomas cup match will all be granted for the price of a single match ticket, priced at £25, £15 and £10 for Under 16s available now from Ticketline UK 02920 230 130 or in person at Ticketline UK head office 47 Westgate Street, Cardiff. From Monday tickets will also be available online at http://www.ticketmaster.co.uk/, the Ticketmaster UK hotline: 08705 582 582 and via www.wru.co.uk/tickets with further information also available at http://www.ospreysrugby.com/.

“We are all looking forward to a magnificent festival of rugby at the Millennium Stadium, which is a superb venue for an event of this sort,” said WRU Group Chief Executive Roger Lewis.

“The event signs on a wonderful season in Welsh rugby and I’m sure Shane, Justin and the qualifying Konica Minolta Cup final teams will create a real spectacle. This format of offering several games for fans to enjoy will offer supporters the chance to use all the facilities the stadium has to offer and saviour a sporting day to remember.”

Fans will also be able to sample the full hospitality of the Millennium Stadium throughout the day with all concourse bars and food outlets open from start to finish.

The tickets also come with special entrance and exit passes which allow fans to leave and revisit the Stadium during the day at their leisure – Gates open at 11am.

Fans wishing to find out more about Shane Williams testimonial year can visit his personal website at http://www.shanewilliamstestimonial.com/.