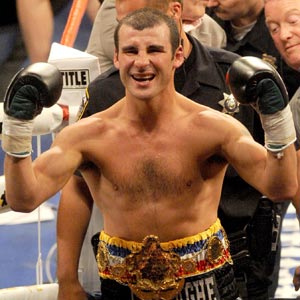 Millennium Stadium bosses have promised Joe Calzaghe the red carpet treatment if he decides to return to his homeland for his next and possibly final foray into world boxing history books.

Calzaghe’s victory over Bernard Hopkins last weekend in America has sparked an array of speculation about a potential career climax fight on home soil and Wales’s national stadium would seem to be the ideal venue for such an occasion.

"Having hosted two of Joe’s recent successes in the ring – wins over Peter Manfredo JR and then Mikkel Kessler in 2007- Millennium Stadium staff hold a special empathy with the Welsh superstar boxer and took an immense amount of pride alongside the rest of the nation from his triumph over Hopkins in Las Vegas on Sunday morning," said a Millennium Stadium spokesperson.

"If Joe never fought again his legendary status in world boxing is surely now cemented in history and we would be proud to be able to say he had boxed here.

"But, if he is to go on and a homecoming on UK-turf is on the cards as has been mooted, then there is surely no more fitting venue to host that event than the Millennium Stadium at the heart of the Welsh capital.

"Fans in Wales and throughout Britain would surely test the world record 50,000 Millennium Stadium attendance for an indoor fight, set when Calzaghe faced Kessler in November 2007, with demand likely to send bosses back to the floor plan drawing board in a search for extra capacity.

"Calzaghe made his debut as a professional fighter on the Frank Bruno undercard at the old Arms Park – the site on which the Millennium Stadium is built – his next fight will be one of those once in a lifetime opportunities no boxing fan will want to miss and the Millennium Stadium would be an apt venue for another momentous event in his glittering career, if it was deemed appropriate and dates were available."