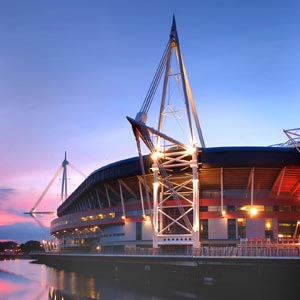 A call for crowd courtesy when away teams are taking goal kicks has been made by the Welsh Rugby Union before the RBS Six Nations Championship encounter with France at the Millennium Stadium on Saturday.

The WRU want supporters to remain silent when players are preparing to place-kick at goal. Tannoy announcements will be made before the kick-off against France to remind the crowd of the courtesy they should obey at all international matches.

The appeal is being made in the wake of a trend for supporters to call out as kickers begin their run-ups.

The Millennium Stadium manager Gerry Toms said: "Our rugby supporters enjoy a worldwide reputation for being knowledgeable and courteous to visitors and we do not want a few people to tarnish that.

"Welsh fans are right to be passionate supporters of the team but that has to be tempered with good manners before, during and after matches. We all welcome the wonderful crescendo of noise which always greets the Wales team and along with the singing it is something we encourage.

"In some games we have noticed that a small element in the crowd want to shout or call out when the kicks are taking place and what we are doing now is reminding people there is no place for that in rugby.

"The more mature supporters should know what is expected and we want to take this opportunity to ensure that any newcomers to the stadium understand the level of fair play we expect from supporters.

"There is always a great atmosphere in the stadium and this Six Nations has been truly exceptional with top draw performances from the players. The standard of behaviour at the games is always exceptionally high and I take this opportunity to praise our fans for continuing to maintain that standard.

"The typical Wales supporter is passionate and certainly knows how to celebrate but it is always fantastic to see the camaraderie which exists between the home and away fans at all rugby matches.

"Rugby is a game all the family can support and the experience of visiting the Millennium Stadium will always be a sporting highlight in the life of any supporter."

On Saturday the choral singing traditional of the stadium will be boosted by the presence of five choirs representing the Wales regional rugby teams and North Wales for the S4C Codi Canu singing competition.

The stadium is being opened from 3.30pm so that fans can gather inside the ground to savour the atmosphere well before kick-off.