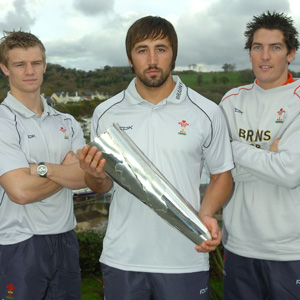 The newly created Prince William Cup is to be placed on display at the Millennium Stadium in Cardiff.

It is awarded to the winning team every time Wales and South Africa play an international or a series of games outside the Rugby World Cup. But, just like The Ashes in cricket, the trophy will remain in one place so the Millennium Stadium will be its home.

The Welsh Rugby Union has decided to display the cup in a trophy cabinet within the stadium at a location where all visitors on guided tours will have a chance to see it.

The Cup was formally presented to South Africa when they defeated Wales at the stadium last November in their first match after winning the 2007 Rugby World Cup in Paris.

It was commissioned to celebrate the 100-year history of fixtures between the two nations and the close links forged by them through rugby.

The cup was designed by specialist jewellers Mari Thomas from Llanelli and Nicola Palterman from Neath. It boasts a modern and contemporary design with a line of the Welsh landscape around its seam or lip.

Maps of both South Africa and Wales decorate the surface of the trophy along with a quotation from Nelson Mandela. It is silver lined with 23 carat gold plate and is cone shaped tapering from 16cm at the rim to 8cm at its base.

The future of the cup will next be decided when Wales tour South Africa for a two-match series in June, 2008.

Millennium Stadium Manager Gerry Toms, said: "It is a magnificent trophy and we want as many people as possible to have the chance to see it. It will be displayed in a trophy cabinet in a prominent position because it is now part of our rugby heritage and history.

"We are now in the process of deciding precisely where the trophy cabinet will be placed but it will certainly be in a position where the members of the public on guided tours of the stadium will get a chance to see it.

"This is just one of the initiatives we are embracing to ensure we make best use of the stadium and ensure it celebrates rugby and reflects how the game defines us as a nation.

"We are extremely proud of our rugby relationship with South Africa and the cup adds an extra dimension to our bond and sporting rivalry."