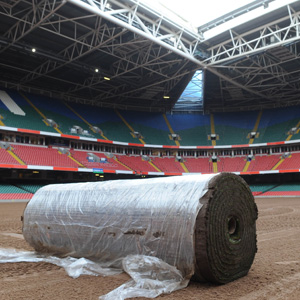 The Millennium Stadium is taking pioneering steps in the turf industry by installing the biggest turfing system in the world in time for the 2008 RBS Six Nations which will further improve the playing surface at the iconic venue.

Turf suppliers Hendrix, who are based in Holland, have supplied the stadium turf since 2006 and is one of Europe’s most successful turf suppliers having provided all the turf for Fifa World Cup, Germany 2006.

This is the first time the system has been used in the UK and turf specialists throughout the UK, including Arsenal Emirates and White Hart Lane, are attending the Millennium Stadium today to witness the operation for the first time.

Because of the increased surface area per roll the whole process of laying the surface is reduced considerably. Although Hendrix were the quickest in the UK to lay a playing surface in only 2.5 days (all other companies take a minimum of four days) this system will allow Millennium Stadium to have their pitch laid within one working day, up to eight hours. Providing more time for the grass to root in and create stronger anchors, thus improving the playing quality and aesthetics of the grass.

Fewer rolls will also mean there are 70% less seams and joins in the pitch which cause weakened areas in the surface.

Head Groundsman Lee Evans is excited by the innovative system and is encouraged by previous testing’s in FC Hamburg, "This is really cutting edge for the turf industry and I’m delighted we are able to showcase the system here at the Millennium Stadium.

"It is an exciting time to introduce the new turf, with the three Six Nations games coming to the stadium in a couple of weeks.

"The lighting rigs we have here provide sufficient heat and light to encourage the grass to take root, so this new system combined with the lighting rigs will mean matches played here will be on a healthy, high quality playing surface."