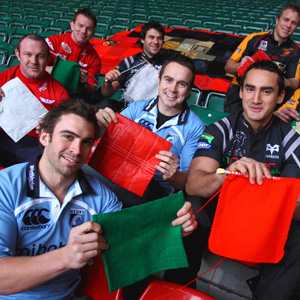 Rugby players from the Blues, Ospreys, Dragons and Scarlets joined Tŷ Hafan to appeal to people in Wales to raise money by creating individual textile squares to make an enormous picture of the Welsh Dragon.

When completed the giant blanket will fill the pitch of the Millennium Stadium. The blanket is expected to raise more than £100,000 for the hospice, which cares for children with life limiting illnesses.

The players were knitting and crafting squares in the Stadium to demonstrate how easy they are to produce and encourage as many people as possible to take part over the coming 12 months.

Tŷ Hafan the Children’s Hospice in Wales is appealing to the people of Wales to create textile squares, as simple or elaborate as they wish, to become part of the charity’s giant Welsh Dragon.

Made up of 108,000 individual squares, the blanket will form an enormous picture of the Welsh Dragon. When completed the blanket will be so big it will have to be assembled on the pitch of the Millennium Stadium in Cardiff.

Squares can be created using any craft technique possible and people are asked to donate a minimum of £1 per square. To apply to make squares you simply fill in an application form on the Tŷ Hafan website (or call to order a hard copy application pack) and you will be sent instructions of the size and colour of your squares.

Once completed volunteers will stitch together sections of the Welsh Dragon to create the epic patchwork.

All money raised will go towards the free and vital service Tŷ Hafan provides each year to over 170 children with life limiting illnesses and their families. The Hospice also continues to give support to a further 100 families who have sadly lost their children.

Project co-ordinator Liz Rundle said: “We’re delighted that Wales’s regional rugby teams have got behind the Dragon Appeal and have joined us at the Stadium to create squares rather than play rugby! We’re hoping that by this time next year we’ll have enough squares to fill the Stadium and will have raised £100,000 to go towards our annual running costs of £2.5 million.”

To apply for a square contact Liz Rundle on 029 2067 2060, email supporterservices@tyhafan.org or apply online at https://www.tyhafan.org/