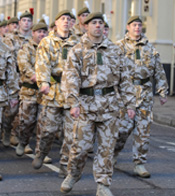 The Royal Welsh return from Iraq

More than 3,000 friends and family turned out at the Millennium Stadium to welcome home the 2nd Battalion of The Royal Welsh following their latest six month tour of duty in Iraq – their third in the past four years.

Having launched their homecoming parade at Cardiff Castle, the Welsh Warriors marched into the home of Welsh rugby for a moving memorial service and Medals Parade that paid tribute to the five soldiers who were killed on active service during their tour of duty.

The 450 strong battalion of soldiers, who are based at Barracks in Tidworth, exercised for the first time as The Royal Welsh Regiment their right to march through the streets of the Welsh capital with Colours flying. The parading soldiers were led by the Band of the Prince of Wales’s Division, and a Warrior Armoured Vehicle, on their march from Cardiff Castle to the Millennium Stadium.

In the absence of Chief of the General Staff, General Sir Richard Dannatt, KCB, who was unable to attend through illness, the Adjutant General, Lieutenant General Sir Freddie Viggers formally welcomed the troops back to Wales and took part in the ceremony to hand out Iraq medals to the troops.

The Battalion’s Commanding Officer, Lieutenant Colonel James Swift, paid tribute to the five fallen soldiers and also praised the City of Cardiff and the Millennium Stadium for welcoming home his troops.

"This has been the most demanding and dangerous tour of Iraq and the professionalism and bravery of these Welsh Warriors has been awesome. I has also helped the breakthrough that has seen violence dramatically decrease and the Iraqis increasingly take control.

"The support from all those at home, both when we were away and today, has been tremendous and means a great deal to the soldiers. We are very lucky to be able to mark our return to Wales in such style and pay a fitting tribute to our fallen comrades."

The Minister of State for the Armed Forces, Bob Ainsworth MP, was joined by local dignitaries from both the Wales Assembly Government and Cardiff City Council. The President of the Welsh Rugby Union, Denis Gethin, was also in attendance.

"The WRU was delighted to throw open the doors of the Millennium Stadium to welcome home the 2nd Battalion The Royal Welsh. These brave men and women are deserving of our highest praise and gratitude for the dangerous work they undertook in Iraq and it was an honour to host them," said the WRU President.