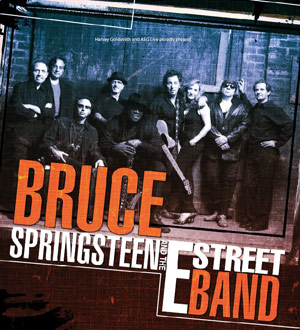 The Boss comes to Millennium Stadium

When the lights go out on Saturday 14th June 2008 at Millennium Stadium, thousands of expectant revellers will be ready for legendary rocker Bruce Springsteen to wow them with all the passion and energy the iconic performer is famous for.

Tickets for Bruce Springsteen and the E Street Band in concert will go on sale on Wednesday 5th December 2007 at 9.00am after the first series of tour dates for 2008 were announced today (Monday 3rd December). The first leg of Springsteen’s tour arrived in Europe on Sunday and drew ecstatic reactions from press and fans alike.

Bruce Springsteen’s twenty-third album ‘Magic’, which was released on 1st October through Columbia Records, debuted at No.1 and has passed Platinum status, demonstrating his huge fan base and following.

Bruce Springsteen has never before performed at the Millennium Stadium but the stadium gig is expected to sell out soon after tickets are released so fans are encouraged to book tickets as soon as they go on sale.

Stadium Manager Gerry Toms said: “This is a fantastic coup for the Millennium Stadium, there are only three UK dates and Bruce Springsteen has such a great reputation as a live performer I think we can expect a memorable show.

“This is the first concert we can announce at the stadium in 2008 and it’s a major opening show, we would encourage people to buy tickets as soon as possible to avoid any disappointment.”

Tickets go on sale Wednesday 5th December at 9.00am and are available from the the official national ticket hotline (08705 321 321), www.harveygoldsmith.com or www.ticketzone.co.uk or by visiting from https://www.ticketmaster.co.uk/ or by calling 08705 582 582.