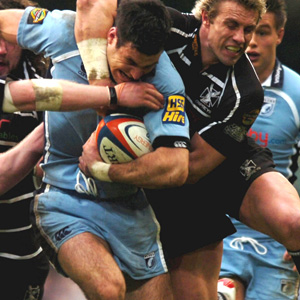 The 2008 EDF Energy Cup semi-finals will be played at the Millennium Stadium in Cardiff.

Following the success of last season’s double-header, the venue will again host back-to-back matches on Saturday March 22nd (2.30pm and 5.15pm) with the final being held at Twickenham Stadium on Saturday April 12th (2.30pm).

Leicester Tigers’ Acting Head Coach Richard Cockerill said: “The Millennium Stadium is a fantastic venue and we have fond memories of playing there last year. The atmosphere was great, especially with having the back to back semis.

“We’ve done well so far in the EDF Energy Cup but we’ve got a massive game still to come against Sale Sharks which will determine whether we get back to Cardiff again.”

Ospreys Head Coach Lyn Jones added: “Last season’s semi-final at the Millennium Stadium was an event that will live long in the memories of Ospreys players, supporters and coaches.

“The result went our way on that occasion and whilst we have shown good form in the EDF Energy Cup so far this season there is still a lot of rugby to be played before we get to this year’s semi-final. Fixtures at venues such as the Millennium Stadium and Twickenham are what top level rugby is all about and we hope to be there again this season.”

Louise Poole, EDF Energy Head of Brand, said: “We had great back-to-back semi-finals at the Millennium Stadium in the EDF Energy Cup last time and I’m sure it will be another fantastic occasion this season. It will be fascinating to see which sides make it through in the crunch matches in round three on the first weekend in December.”

(Tickets for the EDF Energy Cup Final at Twickenham are also on sale from Ticketmaster, priced £45, £30, £20 and £10 for Under 16s. All adult tickets booked before December 3rd are half price.)