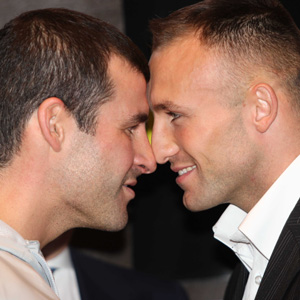 Calzaghe plans to celebrate in style

Joe Calzaghe aims to knock-out Mikkel Kessler so he can start his Christmas celebrations nice and early.

Super-middleweight king Calzaghe has revealed he plans to celebrate laying-out the unbeaten WBA and WBC champion at Cardiff’s Millennium Stadium on Saturday night in style.

Calzaghe said: "I haven’t had a drink in seven weeks so I can’t wait for Sunday. This is the type of fight I’ve waited for years – I’m really excited.

"It’s a massive fight but I’m used to the pressure. I’ve been world champion for ten years so it’s refreshing."

WBO champ Calzaghe takes on great Dane Kessler, dubbed the Viking King, in the biggest fight of the year between the world’s best super-middleweights.

The fight is not expected to start before 1am Sunday to be screened on prime-time American television, but fight fans have been warned to be inside the stadium by 10.30pm, or face a lock out.

Promoter Frank Warren said: "This is the fight that all boxing fans want to see. It’s the best fight I’ve ever been involved in. But the fans will have to be in by 10.30pm to see it. After that, you will not get in the door.

"The fans are in for a treat. I’ve never seen Joe Calzaghe so confident and relaxed. I know he’s going to win this fight and I feel it’s his destiny."

Tickets are available now from Ticketline on Westgate Street or via 02920 230 130, and to personal callers only on Saturday from the Cardiff Blues Ticket Offfice, Westgate Street, from 12pm to 10.30pm.