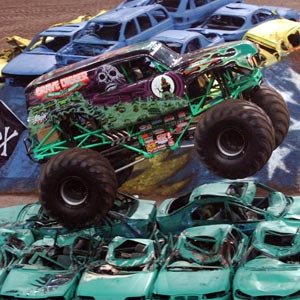 The event made history as the biggest Monster Truck event outside of America, and the massive machines are set to return to Cardiff on June 7th, 2008 – tickets go on sale this Friday (November 2nd).

The atmospheric bowl was transformed into a monster trucks track with over 3500 tonnes of dirt laid out across the concrete surface, ready for some side-by-side racing and freestyle competitions. The American drivers showcased their unique skills controlling the mammoth machines and pulling stunts such as wheelies, huge jumps and large scale ‘donuts’, wowing the excitable crowd.

The Monster Jam show is one of the biggest family entertainments events in the US and Saturday’s event in Cardiff definitely followed in those footsteps. Venue Sales Manager Alex Luff brought the event to the Millennium Stadium after visiting the show in the United States last year.

"Monster Jam at Millennium Stadium has taken off more than we ever could’ve expected," said Luff.  "We’ve broken all UK box office records and had a complete sell-out on Saturday night with more than 44,000 spectators filling the Stadium bowl.

"This is the first time we have had Monster Jam at the Stadium and we were looking at how the public would take to this type of motorsport event; the results so far are staggering, and we hope to build on this enthusiasm for next year, so you can expect even bigger and better on June 7th.

"The Millennium Stadium is fast becoming the UK motorsport venue as we’re hosting more and more near capacity crowds at events such as Speedway and Rally; and Monster Jam looks like being right up there with those well established events."

Monster Jam promoters were just as delighted with the crowd attendance, Magnus Danielson Monster Jam Senior Director said: "We’re thrilled to be here in the fantastic Millennium Stadium, this is the largest facility we have visited on the whole of the European Tour and we’re delighted so many people attended and enjoyed the spectacle.

"Not only have we broken the UK Box Office record but along with our partners at Millennium Stadium, we have been able to set another record for the single largest viewing audience for a Monster Jam event in the history of the European Tour.

"I’d also like to make a special thanks to our sponsors Bravo2 and Jetix who were a huge part in the success of our first UK Monster Jam event".