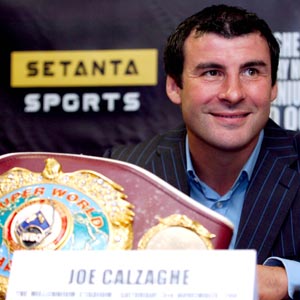 Patriot Joe Calzaghe has vowed to put a smile back on the faces of Welsh sports fans when he fights Mikkel Kessler on November 3 at the Millennium Stadium, Cardiff.

Calzaghe watched in disbelief as Wales crashed out of the Rugby World Cup to Fiji at the weekend, a result which left a nation in mourning.

And he says he’ll make up for the shock defeat when he puts his WBO and Ring super-middleweight titles on the line in his titan scrap against WBC and WBA champion Kessler next month.

"It was so disappointing to see the rugby boys go out," said Calzaghe. "I know how much it means to everyone, especially in South Wales where I come from.

"But it just makes me even more determined to beat Kessler on November 3rd and show that we can produce champions in Wales.

"It’s not going to be easy because Kessler is number two in the division, but I’ve been a world champion for 10 years and I don’t plan on bowing out yet.

"After Wales’s defeat on Saturday I put in a couple of extra hard training sessions to ensure that I will be in the shape of my life on November 3rd.

"All of Wales will be expecting a win, and I intend to deliver."

Gerry Toms, Millennium Stadium Manager is expecting the night to be just as passionate as any rugby international, "When Calzaghe fought last year the Millennium Stadium was reminiscent of that of a Wales rugby match, the whole bowl was filled with song and fantastic Welsh passion.

"It’s occasions like these that really show how patriotic and fanatical about sport Welsh people are, but not only that, it’s striking how much the Stadium itself is a catalyst for incredible atmosphere and we’re expecting fight night on November 3rd to be unforgettable".

Calzaghe, undefeated in 43 fights, will celebrate a record ten years as WBO World Super-Middleweight champion on October 11th – the day he dethroned British great Chris Eubank to win the title.

He aims to make it 21 straight defences against Kessler, on a show that will be screened live in the UK by Setanta Sports and HBO in the USA.