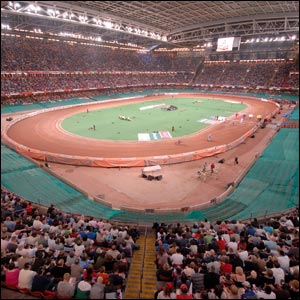 It’s the news all British speedway fans have been waiting for, June 28th is confirmed as the date for the 2008 FIM British Speedway Grand Prix to roar into the Millennium Stadium.

For the eighth consecutive year the event will be held at Cardiff’s multi-functional venue and fans who book their tickets before 31st December 2007 can get a discount of up to 10% off 2008 ticket prices.

“The British GP at Cardiff has grown into one of the ‘must-see’ events on the sporting calendar.  The Millennium Stadium is what Monaco is to F1 and Wimbledon is to tennis, it’s our flagship event and sets the benchmark for the rest of the Series. ”

Great Britain celebrated a home grown winner for the first time in 2007, a historic occasion for the sport, as Bellamy explained:

“This year’s British GP will go down in history as one of the most memorable nights in British speedway. Chris Harris’ dramatic pass of Greg Hancock on the last bend of the final was a moment that few of the 42,000 crowd will forget in a hurry.  I always said that if we had a British winner that it would practically lift the roof off the stadium, and it almost did!

“It is a credit to all the riders, staff and, of course, the fans that the British round of the world championship is such a special occasion, making it the largest arena motorsport event in Europe.”

Roger Lewis, WRU Group Chief Executive said, “This is one of the jewels in the stadium’s year. Speedway fans tell us it’s a highlight in their sporting calendar. The fans turn up in their ten’s of thousands from all over Europe. They are exceptionally loyal and passionate about their sport and also the stadium. They clearly have a great time here at the Millennium Stadium and we now welcome them back as friends of Wales year after year.”