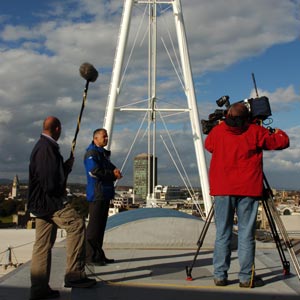 TV weatherman Derek Brockway climbed to the top of the Millennium Stadium in Cardiff this evening to broadcast his forecast live from on top of the roof.

He braved the elements 30 metres high to let BBC Wales Today news viewers know what weather to expect in the run up to the international rugby match against Argentina on Saturday.

Derek and his cameraman beamed their pictures to a satellite transmitter vehicle parked at street level which then broadcast the report to viewers through the Llandaff studio.

Thousands of late night shoppers in the capital city were unaware that the broadcast was taking place out of their line of vision on top of the world famous stadium.

It was the first time Derek has broadcast a weather report from the roof in the eight years since the stadium was built. Derek was perched on a platform alongside the sliding roof which can be closed in twenty minutes to stop the weather threatening major events taking place inside.

BBC Wales decided to broadcast the rooftop report in the run up to the Invesco Perpetual Summer Series international which kicks off at 2.30pm on Saturday.

Derek said: "I’ve broadcast weather reports from fascinating locations all around Wales but the Millennium Stadium roof is certainly one the viewers will remember.

"I’ve attended lots of games and events inside the stadium but I didn’t quite expect to be clambering up onto the roof this week."

Millennium Stadium Manager Gerry Toms said: "The rooftop is a fabulous location with panoramic views across Wales and southern England.

"It’s a hive of activity inside the stadium this week as last minute preparations for the big game are completed so Derek was able to have some peace and quiet on the roof for his report.

"The Millennium Stadium is now undoubtedly one of the most famous landmarks in Wales and we are delighted that BBC Wales chose to feature it in this way.

"We are particularly proud to be the only stadium in the UK with a closing roof which means we are very interested in getting accurate weather reports before big events. We pride ourselves on being able to guarantee all events will take place no matter what the weather throws at Wales.

"It looks spectacular from the rooftop but there is space up there designed to be used by us so Derek and his camera operator were perfectly safe."

The newly installed pitch lighting rig which helps develop and strengthen the turf has now been wheeled off the pitch in preparation for Saturday. The rugby posts have already been installed and on Friday the groundstaff carry out the precision task of marking out the newly laid pitch for the international.

Tickets for the game are on sale to personal callers only from The Millennium Stadium Ticket shop, 98 St Mary Street, Cardiff until 5pm on Friday, tickets can then be bought from the Cardiff Blues ticket office, Cardiff Arms Park, on matchday.