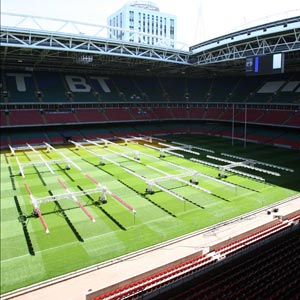 After a very successful trial period, Millennium Stadium have purchased a full set of lighting rigs, vastly improving the root growth and visibly improving the playing surface of the iconic venue – soon to be showcased at Wales’s Invesco Perpetual Summer Series matches against Argentina and France.

Since opening in 1999, Millennium Stadium has cemented its reputation as one of the best multi-event facilities in the world, hosting events such as Rod Stewart, boxing, FA Cup and Heineken Cup finals and many more but one recurring challenge faced by the Cardiff amphitheatre has been maintenance of the highest standards of pitch quality.

The design and nature of the Millennium Stadium is simply not conducive to growing grass, and various measures have been employed to circumvent this problem.

The steep sided bowl, which creates such excellent sight lines for fans, has the side-effect of producing hostile conditions for the pitch – preventing sufficient light or air movement from reaching it.

Previous solutions have included bringing in a new pitch on demand per event but the Stadium has employed a new lamp system since February and achieved a near perfect ‘microclimate’, providing sufficient heat and light to encourage growth.

Coupled with a 24hr-a-day vigil from head groundsman Lee Evans and his team, the results have shown that the Millennium Stadium surface has responded extremely positively.

“The lights have proven to really make a difference to the playing surface both above and below the turf,” commented Evans.

“With a full set of nine lighting rigs, below the turf the roots are now anchoring into the rootzone which increases the stability of the playing surface.

“At grass level, the plant grown under the lights is able to recover quickly from wear and tear and tiller (throw out new shoots).

“This results in a thicker, denser, healthier grass.”

Millennium Stadium bosses have been looking into a variety of tactics to solve their grass challenge for a number of years.

The playing surface currently in use was brought in from Holland and has a unique quality giving it a high resistance to shade.

The light innovation technology, currently used by the likes of Emirates Stadium, Twickenham and Whitehart Lane, has proven to be a strong contender to form part of the pitch growth solution.

“We have carried out an enormous amount of research into grass growth and maintenance in the search for the answer to the Millennium Stadium’s well-known grass-growing challenge,” said Roger Lewis, the Group Chief Executive of the Stadium’s owners, the Welsh Rugby Union.

“There is no doubting that we have a magnificent multi-event venue which has the versatility to host a wide spectrum of events here in the City centre of Cardiff.

“But we feel we can improve on perfection and an established, flourishing playing surface would be one way of doing that.

“The lights have shown a dramatic improvement and the results of the four-month trial convinced us to purchase the full set.”

The nine strong rig covers covers half of the pitch for 12 hours of the day, Lee Evans and his team then reposition the rig to cover the opposite half for another 12 hours and the cycle begins again.

Stadium bosses are confident that the venue now has arguably one of the best playing surfaces on a world stage and the famous hectare of grass will be showcased during Wales’s Invesco Perpetual Summer Series matches against Argentina on August 18th and France on August 26th.

Tickets are available from Tel: 08705 582 582 or visit Millennium Stadium ticket shop, 98 St Mary Street or log on to https://www.ticketmaster.co.uk/