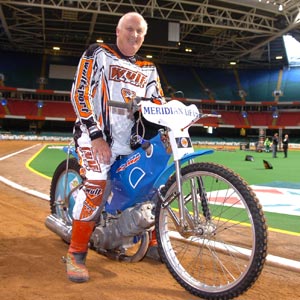 Millennium Stadium chief Gerry Toms showed what being a ‘hands on boss’ is all about yesterday.

Toms, a former Chief Superintendent of South Wales Police who has an advanced motorbike licence to his name, joined a selection of amateur riders invited to sample the uniquely designed 275 metre Millennium Stadium track.

A record attendance of 40,000 plus fans is expected from all over Europe to witness 16 professional riders, four at a time over four laps in 23 heats, racing at speeds of over 70 miles an hour around the circular course which was designed by former three-times World Champion Ole Olsen.

“These bikes are impressive machines, the power in them is astounding and you have to be very careful with your throttle control in order to counteract the lack of any brakes!” said Toms.

“Riders only go around the track in one direction (anti-clockwise), so the natural state for these bikes is to lean to the left and slide around the corners, and to do that and maintain control over the machine you need to be really travelling.

“Speedway at the Millennium Stadium has always been an impressive spectacle, but I will have extra empathy with the speeds these riders will be reaching on Saturday having experienced the power of these machines myself.

“This event started at the Stadium in 2001 with around 20,000 fans and we now have more than doubled that attendance as the good word spreads throughout Europe.

“Speedway, and events like it, are critical to us in Cardiff and testimony to the hard work of everyone at the Millennium Stadium in creating the right environment for a wide variety of shows throughout our calendar.

“We have a Monster Trucks show visiting us next, an American concept appearing for the first time ever in the UK and, with Rod Stewart on his way to visit us before Rugby World Cup time, we are as busy as ever.

“And that’s what we need, long term successful events which will come back year on year and bring out the crowds.

“We have the most versatile and uniquely sited stadium in Europe, if not the world, and whatever event you can think of we would find a way to put it on – assuming we have a spare weekend in that busy calendar!”

Tickets for the FIM Meridian Lifts British Speedway Grand Prix at the Millennium Stadium on Saturday are available from hotline number 08705 582 582 or online at http://www.milllenniumstadium.com/ and start at £15 junior, £32 adult with family tickets just £80 for two adults and two children.

Entertainment, which includes songs from Ray Quinn of television’s X-Factor fame, begins at 6pm with engines starting at 7pm.