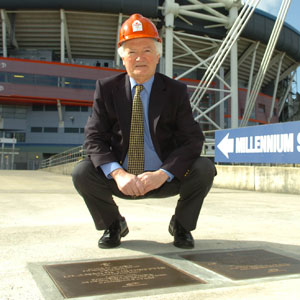 Glanmor Griffiths was today elected to the highest chain of office in Welsh sport, President of the Welsh Rugby Union.

He returns to a senior role within Welsh rugby after stepping down as Chairman of the WRU and the Millennium Stadium plc in 2003.

Earlier this year a plaque was unveiled at the Millennium Stadium to mark the role played by Mr Griffiths in ensuring the stadium was built in time for the 1999 Rugby World Cup.

Mr Griffiths said, "I am delighted to have been elected President because it is a major ambassadorial position and the ultimate honour in Welsh rugby.

"I’ve spent almost half of my life fighting for Welsh rugby. It is a cause I am passionate about and it will be a great honour to serve as President.

"I have great respect for all the other candidates and I personally want to thank everyone who supported my candidature. I still believe I have something extra to give to the game I love and I look forward to the future with pride."

Mr Griffiths beat off tough competition from four senior figures within Welsh rugby to win the highest number of votes from the 241 of the Union’s clubs, four regions and 21 WRU associate members.

The other candidates in the presidency election were Tony Gray, Dennis Gethin, JPR Williams and Dennis Hughes.

The new President will serve until the WRU annual general meeting in October, when there will be another election for a further year in accordance with current Article 48 in the WRU constitution.

The election was made necessary following the unfortunate death last November of the former Wales and British Lions player Keith Rowlands, who was renowned worldwide as both a former player and rugby administrator. The election of a new President was delayed until the end of the RBS Six Nations tournament as a mark of respect for Mr Rowlands and his family.

Mr Rowlands became President in 2004 in succession to Sir Tasker Watkins, who had held the post for 11 years. Sir Tasker, who is now Honorary Life Vice-Patron of the WRU, continued to carry out some of the functions normally performed by the President until a new candidate could be elected.

The President is the senior figurehead of Welsh rugby and is empowered to attend all the major decision-making meetings within the Union’s senior structure.

"Keith Rowlands is a tough act to follow, but Glanmor Griffiths has spent over 20 years of his life working in welsh rugby and I congratulate him after winning such a closely contested election," said Welsh Rugby Union Chairman David Pickering.

"All of the candidates had excellent attributes and each one of them is well known within Welsh rugby circles and we thank them all for putting their names forward. It is a mark of the esteem Welsh rugby is held within the principality that five such outstanding candidates made this bold step.

"We are looking forward to working with the new president in what promises to be an extremely busy period in Welsh rugby’s history."

Roger Lewis, Welsh Rugby Union Group Chief Executive, added: "This is an important role for Welsh rugby and I am pleased we had such a strong list of candidates.

"Glanmor Griffiths has proved in the past how hard he is prepared to work for Welsh rugby and that has been recognised and rewarded in his selection for the role of President.

"We were all extremely fond of Keith and valued his help and guidance enormously so I look forward to building a similar relationship with Glanmor Griffiths."

THE NEW WRU PRESIDENT
GLANMOR GRIFFITHS
The 67-year-old former Midland Bank Corporate Director (Wales) ended a 19-year association with the WRU in 2003 when he stepped down as chairman of both the WRU and Millennium Stadium plc. The Union’s Honorary Treasurer from 1985, he became chairman of the WRU in 1997 and the Millennium Stadium in 1996. Currently President of Ogmore Vale RFC he has represented the WRU on the IRB, Five Nations and Four Home Unions committees and been a board member Rugby Cup Ltd. He was a trustee of the Rugby Charitable Trust between 1985 and 2003.

THE OTHER CANDIDATES FOR THE POSITION
DENNIS GETHIN
The 63-year-old former Secretary of the WRU (March, 1998-December, 2002) won two Blues at Cambridge University before playing with distinction for his home town club Neath and Cardiff. He joined the WRU after stepping down as Chief Executive of the former Taff Ely Borough Council (1982-1996). He is currently a member of the Broadcasting Council of Wales.

TONY GRAY
The 64-year-old former Wales National Coach was the WRU committee representative for District J between 1979-1994. He was Junior Vice-President in the 1992/93 season and stood for the Presidency in 1993. Won two caps in 1968 and made 250 appearances for London Welsh in their heyday. Took over from John Bevan as Wales coach in 1985, leading them to third place at the inaugural Rugby World Cup in 1987 and the Triple Crown in 1988. Is Director of Physical Recreation at Bangor University. Currently chairs the new North Wales rugby union council.

DENNIS HUGHES
The 65-year-old former Newbridge back row stalwart toured twice with Wales and won six caps between 1967-70. Captained his club for six seasons and made 745 appearances for them. Was a member of the WRU Investigative Committee in the eighties and is a trustee of both the Dragons Trust and the Welsh Rugby Charitable Trust. After launching his working career at Lloyds Bank, went on to become a regional sales director with a pharmaceutical company and then a national sales manager for an orthopaedic company. Is a member of the Welsh Academicals RFC committee.

JPR WILLIAMS
The 58-year-old former London Welsh and Bridgend full back won a then record 55 caps for Wales and played in eight Tests for the British Lions as they won successive series’ in New Zealand and South Africa in the seventies. Won three Grand Slams and six Triple Crowns and led his country five times. A former Junior Wimbledon and Welsh Junior tennis champion, he is a retired orthopaedic surgeon. Awarded the MBE in 1977 for his services to rugby, he is President of Bridgend RFC and patron of Tondu RFC, a club with whom he played for 18 seasons.