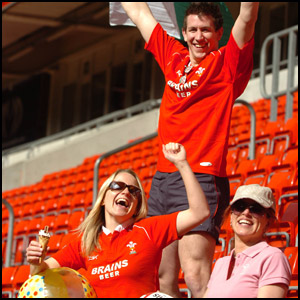 Wales fans will hope to bask in the reflected glory of their national side in more ways than one this August, as Gareth Jenkins’s team takes on Argentina and France in the raised temperatures of the Invesco Perpetual Summer Series.

Tickets go on sale today (April 3rd) at 12 noon and the Welsh Rugby Union is pulling out all the stops to ensure the Pumas and Les Bleus receive a warm reception in a summer Millennium Stadium melting pot.

Flip-flops, t-shirts, caps and beach towels will be the order of the day in WRU shops for the month as the roof opens up to let the sun shine on a unique period of summer rugby.

Jenkins and his side get their first taste of blue skies and sun-baked pitches on a two-match tour to Australia in June and they return home to face Argentina on August 18th hoping to bring back a winning momentum as well as the weather.

Then France come to town on August 26th for the nation’s final chance to see its side on home turf before Rugby World Cup 2007.

“The Invesco Perpetual Summer Series presents a rare opportunity to see International rugby at the Millennium Stadium at the height of summer and poses an exciting prospect for all ahead of World Cup,” said WRU Group Chief Executive Roger Lewis.

“The European Champions come to town in the shape of France and Wales have a wonderful opportunity to reverse the two-match summer defeat to Argentina from 2006.

“Tickets for these matches will be hot property as fans get in the mood for the Rugby World Cup, watching Gareth Jenkins’s Wales pit themselves against two of the top sides in the world game.

“It will be a unique experience to bask in the sunshine whilst watching the team in action and the nation will have to put away the woolly hats and scarves and get out the red sun hats and sun cream!”

Tickets go on sale today, Tuesday April 3rd, at 12pm priced at £30 and £20 for Adults and £15 and £10 concession from Tel: 08705 582 582, at the Millennium Stadium ticket shop 98 St Mary Street or online at www.ticketmaster.co.uk. Unique summer themed merchandise produced specifically for the Invesco Perpetual Summer Series will be available from www.wru.wales/wru-store/.