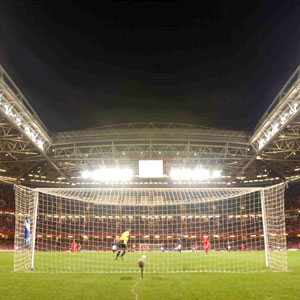 Fans are set to paint the town blue and red as the Football League and domestic club football says ‘goodbye’ to the Millennium Stadium.

A crowd of more than 55,000 is expected to attend the Johnstone’s Paint Trophy Final between Bristol Rovers and Doncaster Rovers as domestic club football departs the capital this weekend.

In paying tribute to the recent home of The League’s showpiece events Football League Chairman Lord Mawhinney said, "I would like to place on record The League’s thanks to the Millennium Stadium and the people of Cardiff for providing such a wonderful home to our finals over these last seven seasons.

"There have been many memorable matches and moments. Perhaps what will live longest in the memory, though, will be the terrific atmosphere generated by fans.

"This Sunday’s match will be no different, with more than 55,000 supporters set to attend, the most we have had for a Cardiff final in this competition.

"As ever, it will be an occasion that gives two clubs the opportunity to revel in the glory of reaching a cup final.  It will also enable both to enjoy the associated financial rewards with each club set to earn more than £400,000 from their day in Cardiff."

Sunday’s match will be the 32nd Final staged by The Football League since football’s showpiece occasions first moved to the Millennium stadium in February 2001. In total, more than 1.6 million supporters have attended matches, watching 46 different clubs in action and seeing 91 goals scored.