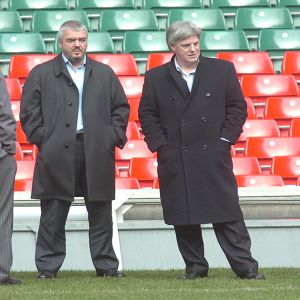 WRU look to the future

Welsh Rugby Union Group Chief Executive Roger Lewis has announced that Steve Lewis and Paul Sergeant will both be stepping down from their respective positions within the company.

In addition, Roger Lewis is set to create a new post of Director of Elite Performance at the WRU. Furthermore, he will also be announcing the names of the successful candidates set to fill the posts of Director of Finance and Head of Communications in the coming weeks.

Steve Lewis started as WRU General Manager in March 2003 before being promoted to Chief Executive under David Moffett. Steve is considering a number of rugby related opportunities at present.

While Gerry Toms will be responsible for the running of the stadium, Roger Lewis will become more involved in the promotional aspects of the business, working closely with the existing events and commercial teams.

"I would like to thank both Steve and Paul for their contributions to the business over the past three and a half years. They played important roles in changing the face of the WRU," said Roger Lewis.

"But now is the time, especially as we prepare for the Rugby World Cup 2007 and beyond and we start to face up to the reality of life without the FA Cup, that we have to take a long, hard look at our organisation and find the best route forward.

"The next twelve months are going to be very exciting and challenging for everyone involved in Welsh rugby. Financially this current year is going to be very tough indeed. We need to act now to secure our future.

"To achieve our ambition to reposition Wales at the forefront of the global game in terms of reputation and standing certain structural and staffing changes are necessary.

"Since joining the WRU in October I have been closely assessing all aspects of the business. I feel there is a need to introduce a significant senior appointment within the organisation to help take our professional game to the next level and that is why I have created the post of Director of Elite Performance at the WRU.

"I want to introduce into our professional game someone of world standing in elite performance who can oversee all the requirements of our top flight players and management from academy level upwards. The global search for the right candidate begins in the New Year.

"Our National Coach, Gareth Jenkins, and his excellent management team have plans well in hand for our 2007 Rugby World Cup campaign. I expect the new Director of Elite Performance to have a major impact on our 2011 Rugby World Cup development, building on the existing strong foundations that are already in place in our elite structure.

"I am looking for someone who will create long term sustainable solutions and processes that will deliver long term success for our national game, through building close-knit support and relationships within all levels of the professional game in Wales.

"Steve Lewis will be credited with changing the face of age grade rugby in Wales and for establishing an Academy system that is beginning to bear fruit for our Regions. I would like to thank him for his considerable efforts on behalf of Welsh rugby."

Commenting on his decision to step down Steve Lewis said: "Massive strides have been made in Welsh rugby over the past three and a half years. I look back upon this period with great pride. There are still challenges ahead, but I wish Roger and the WRU all the very best for the future."

Roger Lewis added: "As for Paul, his decision to move on comes at a time when the Millennium Stadium business is set to be closely re-examined with the opening of the new Wembley Stadium now imminent. In a short space of time Paul made a huge impact not only on the Millennium Stadium, but also on Welsh life.

"He deserves particular recognition for his work in creating the Tsunami Relief Concert and he helped to raise millions of pounds for charity during his time at the stadium.

"Now, though, he is seeking new challenges down under and he leaves with the best wishes and thanks of everyone at the WRU.

Commenting on his decision to step down Paul Sergeant said: "As many people are aware, my wife is an Australian citizen, and it’s simply time to go home. I’ve said very openly from day one that it’s family first and we’ll be heading to the Southern Hemisphere as soon as practically possible in the New Year.

"Wales has been an incredible experience for us and people throughout Wales have been simply awesome.

"I would like to thank the boards of the WRU and the Millennium Stadium, and particularly the chairman David Pickering, for their support, advice and encouragement over the past three and a half years.

"In the short space of time I have worked with Roger Lewis I have come to realise what a shrewd appointment this was for the business. There is no one better equipped to drive the Millennium Stadium and the WRU forward.

"My phone line will always be open if need be in the future and I wish him and everyone associated with the business my whole hearted best wishes and support."