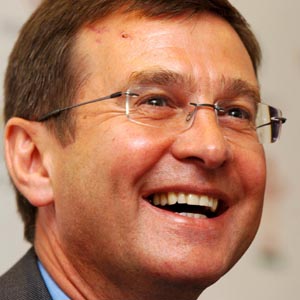 The Welsh Rugby Union Group is pleased to announce that Roger Lewis has been appointed to succeed David Moffett as its Group Chief Executive.

The 52-year-old Welshman will leave his post as Managing Director of ITV Wales to join the Group at the end of October.

His appointment comes nine months after the inaugural Group Chief Executive, David Moffett, left his post. Mr Lewis agreed to take the job after coming through a rigorous recruitment campaign that saw 115 candidates apply for the post.

The recruitment process was handled on behalf of the Group by Odgers Ray & Berndtson, the UK’s leader in global executive search solutions, and Mr Lewis was one of five candidates who reached the elite interview shortlist.

"I was overwhelmed by the quality of the candidates who applied for the post at the outset and I am thrilled to have such an experienced Welshman taking up the biggest post in Welsh sport and entertainment," said WRU and Millennium Stadium chairman, David Pickering. "Roger has proved himself to be a dynamic and astute leader in the world of media and entertainment and will bring a huge range of relevant management and communication skills with him to the Group.

"He has intimate knowledge of the business and political scene in Wales and beyond and joins us having returned to work in Wales two years ago after more than 20 years of highly acclaimed business achievement throughout the UK.

"He has dealt with many of our existing stakeholders, like the Welsh Assembly Government and many Unitary Authorities in Wales, and his experience across a wide range of disciplines make him ideally suited to driving forward both strands of our business, at the WRU and Millennium Stadium.

"The role of Group Chief Executive is a key one in our business. Roger will be charged with building on the excellent foundations laid by David Moffett during his tenure and taking the Group’s activities to a new level.

"He joins us ahead of our Annual General Meeting in Port Talbot on Sunday at which we will be telling our member clubs about a record turn over of £40 million.

"I am very much looking forward to working with Roger to find ways to further enhance our business and ensure that both on and off the pitch Welsh rugby and the Millennium Stadium continues to grow."

Roger Lewis said, "To be appointed Group Chief Executive of the Welsh Rugby Union is not only a great honour, but also an immense responsibility – a responsibility to shoulder the hopes, aspirations and dreams of our great nation.

"My total focus and commitment will be on ensuring the business generates the power to give Gareth Jenkins and the Welsh team everything they require to fulfil their potential.

"The management of the WRU will do whatever it takes to restore Wales to the forefront of world rugby both on and off the pitch. We are committed to regularly competing with and beating our Six Nations colleagues and to contest with the best in the world.

"We will do this by ensuring our strong and prudent financial management continues. In recent years the WRU has performed brilliantly to turn this business around. It is my job now to build on this base, seize the many business opportunities that are available to us and ensure the monies we generate go back into the game.

"We will continue to reduce the debt, continue to generate nw revenue streams and we will make our Union financially fit for 21st century rugby. This will not be achieved on our own.

"Working in partnership with our Regions we will continue to improve our standing, our reputation, our relationships with our colleagues in the Magners League, throughout the UK, within Europe and across the world.

"Most importantly of all, we need to reclaim the game in Wales at grass-roots level. Kids and communities, boys and girls, men and women. Kids and fitness is a key message and so we need to build on our relationships with government at local and national level.

"The beating pulse of Welsh rugby is within our Regions and our national team. The soul is deep within the 245 clubs and Regions who make up the Welsh Rugby Union. We are a Union – we are a band of brothers.

"So, as Group Chief Executive, my calls to action are – Unity right across the game; strong and dynamic financial management and, above all, a winning Wales at the forefront of world rugby.

WRU president Keith Rowlands added, "I am delighted that Roger Lewis has accepted the position of Group Chief Executive Officer. He is a high-flying Welshman who has had a life-long interest in rugby and who will bring with him huge business acumen."

"He was the ideal candidate to fulfil our desires across the WRU and the Millennium Stadium businesses and he has a deep interest in, and understanding of, Welsh rugby.

"The clubs expressed their desire for us to install a Group Chief Executive earlier in the year and we have met our own time frame on filling this vital post."

Clive Jones, Chief Executive of ITV News Sport and Regions said, "Roger brought skill, passion and commitment to his role as managing director of ITV Wales and we are very sorry to lose him from the group, but as a Welshman and a rugby fan I am delighted that the WRU Group will now benefit from his leadership skills. I know he will work hard to ensure that the best possible platform is created for the national team to enjoy a successful Six Nations and a great World Cup. The WRU have hired a very talented and able CEO."

Marital Status: Married to Christine and has two sons, Owen and Tom.

The son of a South Wales steel worker, Roger was born across the road from Cefn Cribwr rugby club, near Bridgend. He played rugby at school and at the University of Nottingham, and prior to becoming a student he played with the Glamorgan Youth Orchestra, the National Youth Orchestra of Wales and the Welsh Jazz Orchestra. Following his graduation, Roger spent four years as a musician, composer and musical director.

Roger has spent all of his 30 year career in the media and music businesses. Five years as a producer at Radio Tees and Capital Radio in London culminated in him joining the BBC in 1985, where he became Head of Music at BBC Radio 1. He produced the breakfast show at both Capital Radio and Radio 1. As a radio producer he also made a number of rock documentaries with artists such as Tina Turner, Eric Clapton, Bob Geldof, Wham and Madonna and produced the Radio 1 Road Show for two years.

He left in 1990 to become Managing Director of EMI’s Classical Division and the EMI Premier Label Group, then World Wide President of the Decca Record Company.

He stayed in the record industry for eight years before joining Classic FM in 1998. He was Managing Director and Programme Controller of Classic FM and a main board director of its parent company, GWR group plc for six years. In 2004 the GWR group produced a turnover of £128.7m and posted profits before tax of £17m. He was also a director of Digital One, the national commercial digital radio multiplex
Roger was credited with bringing Classic FM record audiences as well as revenues in his dual role as Managing Director and Programme Controller and main board director of parent company GWR Group plc. Under his leadership, the station was named ‘UK Station of the Year’ at the Sony Radio Academy Awards, ‘Media Brand of the Year’ at the Media Week Awards and ‘Brand Development of the Year’ at the Marketing Week Awards.

His appointment as Managing Director of ITV Wales in September, 2004, saw him take charge of all broadcasting matters, including the commissioning of the ITV Wales regional schedule. He was also responsible for managing the Regional Affairs department liaising on all compliance, training and broadcasting issues.

He joined the board of HTV Ltd, which has an annual turnover of £102m, and led a major building development project which aims to create a media village for Wales alongside a new business park which potentially will accommodate 2000 jobs.

Clive Jones, Chief Executive ITV News Sport and Regions, said: "Roger brought skill, passion and commitment to his role as managing director of ITV Wales and we are very sorry to lose him from the group. But, as a Welshman and a rugby fan, I am delighted that the WRU will now benefit from his leadership skills.

"I know he will work hard to ensure that the best possible platform is created for the national team to enjoy a successful Six Nations and a great World Cup. The WRU have hired a very talented and able CEO."

In 2006 he took up the Chair of Arts and Business Cymru and was invited by the Welsh Assembly Government to sit on the panel to review the Arts Council of Wales and the future funding of the arts in Wales. His appointment received unanimous support from all four political parties in the Assembly.

From 2000 to 2004 he chaired an Advisory Group for the DFES. He is a Trustee of Masterprize and sits on the Founder Partners Advisory Board of the Beacon Fellowship.

Roger attended his first international at Cardiff Arms Park in 1966 and has held four WRU Debenture seats. He was an active member of Maidenhead RFC from 1993 – 2004, coaching teams up to U19 level. He was part of the coaching staff which undertook tours to Canada, Holland, Spain, and Portugal and around the UK during this time.

Passionate about skiing and serious walking, Roger has walked the UK coast to coast, all over Wales and also in the Scottish Highlands and Swiss Alps.