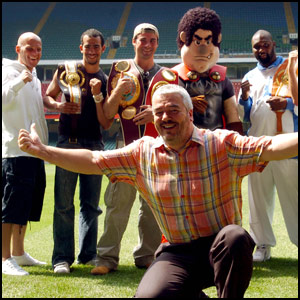 SIZZLING SUMMER AT THE MILLENNIUM STADIUM

Joe Calzaghe joins an illustrious club when he fights at the Millennium Stadium on 8th July to defend his WBO/IBF World Super-Middleweight titles.

The Welsh boxing hero adds to a summer bill in Cardiff featuring some of the World’s top music acts and greatest annual sporting fixtures in a sizzling season of entertainment launched on Thursday.

Stadium Chief Executive Paul Sergeant, who also celebrated his third year at the helm of Wales’s iconic multi-facility event venue with a celebrity party today, named the Calzaghe fight amongst 15 World class events from the worlds of sport and music set to draw up to a million people to the capital in just one summer.

The three Coca Cola League Play-Off finals are all in May, as is Cardiff Blues’ Celtic League title showdown with Brian O’Driscoll’s Leinster, while June sees the return of the British Speedway Grand Prix.

July sees Wales’s greatest ever boxer return to Cardiff 13 years after his professional debut as the Millennium Stadium hosts its first major boxing bout. Joe’s debut was at the old Cardiff Arms Park in 1993 when he beat England’s Joe Mason in the first round on the undercard of the World heavyweight title fight bill featuring Lennox Lewis and Frank Bruno.

“It is going to be an incredible summer season for us. The 15 major events scheduled over the next four months which will attract up to a million visitors to the Millennium Stadium,” said the Stadium’s Chief Executive Paul Sergeant.

“It will be our biggest ever summer and one which shows off the wide ranging ability we now have at the stadium. These events will follow on from three sell-out Six Nations matches for Welsh rugby and will lead us into the attractive four match Invesco Perpetual Series for our national side in November.

“The turnaround of events requires a huge amount of expertise which we have vastly developed over the last two years and we are slowly but surely beginning to realise the potential of this magnificent, versatile, multi-facility event venue.”

* For ticket information and hospitality availability on the above events please click here.