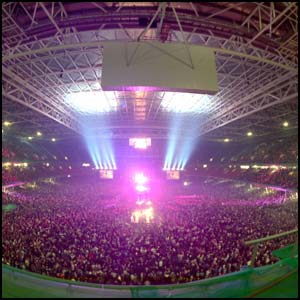 The special fund-raising event, which will feature many of the UK’s best known and loved bands, is aimed at raising £1m for stricken families in south-east Asia.

And rock legend Eric Clapton has pledged his full support to be one of the main acts at the event which will take place on Saturday 22 January. Confirmed acts from across the music spectrum including the likes of Feeder, Lemar and Jools Holland will entertain fans throughout the day, with Wales’ Aled Jones and Katherine Jenkins adding to the party.

There will be space for up to 65,000 fans to join the party in the Welsh capital and they will be able to enjoy more than six hours of top flight entertainment and join the rest of the world in raising money for those left with so little after the tsunami disaster on Boxing Day.

“There has been such an overwhelming response from the general public to the terrible disaster that devastated so many coastal regions of Sri Lanka, Indonesia, Malaysia, Thailand, India, Bangladesh, Burma, Somalia and Kenya that we felt honour bound to try to do something to help,” said Paul Sergeant, general manager of the Millennium Stadium. “We have been overwhelmed by offers of help – from money and private jets to offers of technical equipment such as staging, lighting and specialist services. All the bands will be giving their services for free.

“We’ve had a magnificent response from the music industry and a multitude of bands from Wales, the UK and across the world have offered to play at the concert. Many others have called wishing they could take part but are unable to, due to commitments around the world.

“Everyone has been incredibly supportive of what we are trying to do and the local authorities and the police have played a key role in clearing the way for us to put the show on. We have also had messages of support and encouragement from major aid organisations such as Oxfam and the UNHCR. Wales’ First Minister Rhodri Morgan has pledged his full support.

“We believe that TSUNAMI RELIEF CARDIFF will provide a focal point for people throughout the UK and across Europe to express their feelings about what happened on Boxing Day and to do something positive by buying a ticket.”

Tickets go on sale tomorrow, Saturday 08 January at 11am on 08705 582 582 or www.ticketmaster.co.uk priced at £30, £22.50 and £15, Ticketmaster will not be charging a booking fee. Corporate tickets will also be available, for all information check www.millenniumstadium.com/tsunamirelief .

It is anticipated that the gates will open at around 2pm and the last act will finish on stage at 10.30.

“There is obviously a huge demand for people to come together in the UK and express their support for the grieving families and communities in south-east Asia and across the world. Now that we are committed to providing a focal point for that support we are looking for a rapid response to ensure we can hit our target of raising £1m,” added Sergeant.

The tsunami left almost 150,000 dead, more than one third of which were children, and at least 5 million people without food and water. It is estimated that around 3 million are homeless.

More details of the bands who have committed to play on 22 January will be announced over the next few days, check www.millenniumstadium.com/tsunamirelief for all information.