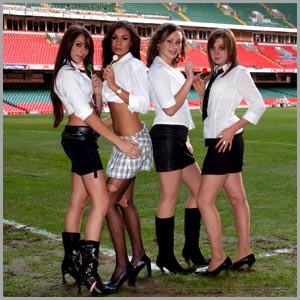 The four teenage divas – Casey, Niki, Tara and Vicci – aren’t old enough to meet the strict 18 and over age limit required to buy a ticket for the ‘Millennium Stadium School Party’ on New Year’s Eve, but they will be able to join in some of the fun on the big night out by agreeing to perform live for an expect 10,000+ crowd.

“We’re hoping everyone in Wales will support our new single, a cover of the 1970s No 1 hit ‘Video Killed the Radio Star’, and we’re really looking forward to singing it at the stadium again on New Year’s Eve,” said 16-year-old Niki Fitzgerald, whose dad Bill manages the band. “We sang it at the stadium before they showed the England v Wales soccer match on the big screen a few months ago and it was an amazing experience to perform in front of more than 8,000 people. We’re hoping there will be even more there on New Year’s Eve.”

The inaugural ‘School Party’ attracted 7,500 revellers and Millennium Stadium organisers are hoping to get close to double that number for the 2004 into 2005 event.

“We had a fantastic response to the ‘School Party’ last year and we are delighted to be able to accommodate even more party goers this New Year’s Eve. We learned a lot about how to throw a big party last year and so next month’s event is going to be even bigger and better,” said Millennium Stadium spokesman Rupert Moon. “There will be more fairground rides, more live acts, an even longer bar than last year and a bigger stage area. We’ll also be opening the bars and food outlets on the lower concourses to enable everyone to have a great time.

“The roof will be closed to keep the rain out and, with twice as many hot air blowers as last year, the heat in. All the signs are that there will be an even bigger demand than last year and we hope to have not only the biggest New Year’s Even party in Wales, but one of the largest in Europe.”

Tickets for the ‘School Party’, which is being promoted in association with Red Dragon FM, go on sale today and are priced £10.

There is a special ‘Early Bird’ offer for those who like a bargain with the first 500 tickets (last year that many went in the first 30 minutes) being offered at half-price.

Tickets can be purchased from Ticketmaster 0870 4000 722 or by visiting the Millennium Stadium Shop at 98, St Mary Street, Cardiff.

You can also purchase online at Ticketmaster by clicking here. Visit www.stadiumschoolparty.com for further details.