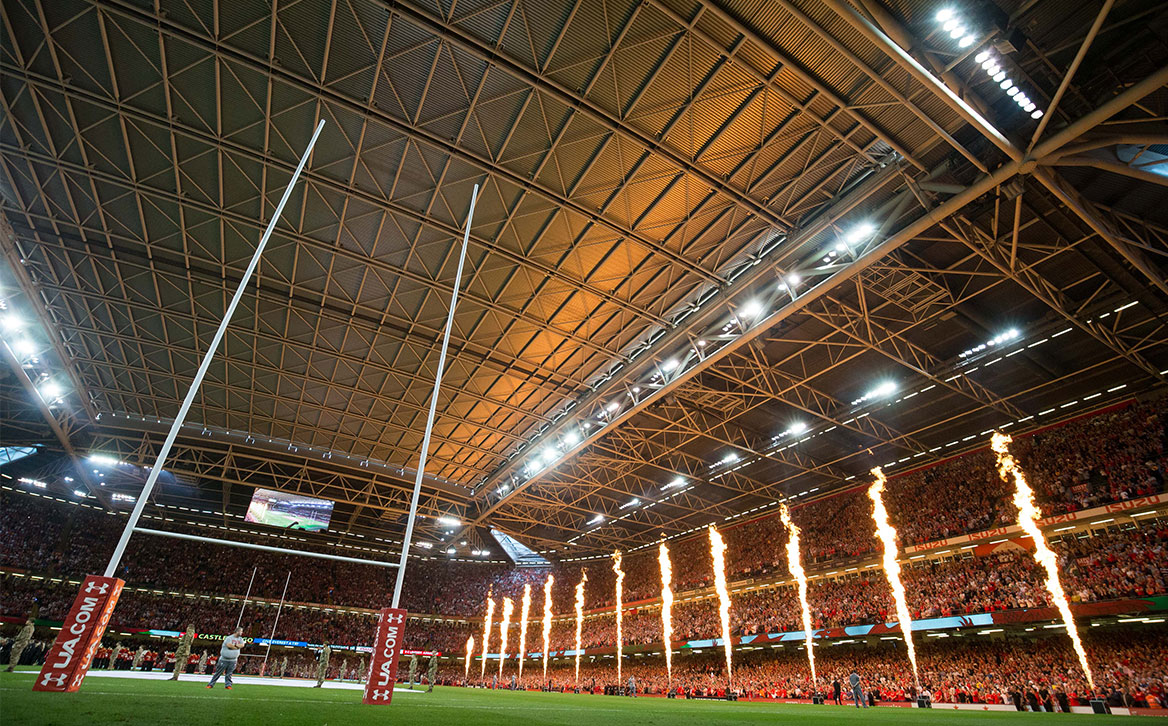 Since opening in June 1999, the Millennium Stadium has welcomed, on average, over 1.3 million visitors per year.

Sporting the first fully-retractable roof in the UK, the venue is at the leading edge as a multi-purpose, multi-faceted event venue. The Millennium Stadium boasts a UEFA 5-Star rating and has hosted matches from two Rugby World Cups including the Final in 1999, witnessed three Wales Grand Slam successes in the RBS Six Nations, staged six showpiece FA Cup Finals plus hosted the major artists of the music business with a plethora of major concerts and motorsports events on its CV.The installation of a partition drape system in July 2005 now means that the bowl of the Millennium Stadium can be used for multiple concert mode configurations and for staging exhibitions. The new Desso pitch installed in the summer of 2015 means the stadium will be retains it reputation of being one of most modern stadia in the world.

Background to the Millennium Stadium Project

As early as 1994 a group redevelopment committee was set up to look at redeveloping the Wales National Stadium and linking the redevelopment to the regeneration of West Cardiff. In 1995, the Welsh Rugby Union won the right to host the 1999 Rugby World Cup against severe competition from rival bids from the Southern Hemisphere. A review of the National Stadium at Cardiff Arms Park (designed in 1962) showed that it had long since been overtaken; with Twickenham and Murrayfield having developed stadia with capacities of 75,000 and 67,000 respectively and France about to build the Stade de France with a capacity of over 80,000.

Capacity in the old National Stadium was 53,000 (including 11,000 standing in the East Terrace). New safety regulations would mean that the capacity would be further reduced by ‘all-seater’ arrangements. There were no spectator facilities in the old Stadium other than toilets. It was decided that the new Stadium should have a roof to accommodate a requirement for multi-usage and also a natural grass pitch for rugby. Therefore a retractable roof was incorporated into the design brief. The only other retractable roof in Europe at the time was at the Amsterdam Arena (with a capacity of 50,000); the home of Ajax Football Club.

It was clear from the budget requirement for the Millennium Stadium (of over £100m) that Government Funding would be required. The only potential source of funding at the time was the National Lottery, set up in 1994, as one of eight major UK projects of the Millennium Commission.

Criteria that the Millennium Stadium had to meet in order to qualify for funding were:

The Millennium Commission were prepared to fund a maximum of £50m worth of the redevelopment. The Welsh Rugby Union decided to raise the remainder of the £114m budget from commercial sources.

After competition from the proposed Cardiff Bay Opera House in March 1996 the Millennium Commission agreed to support the redevelopment of the Cardiff Arms Park site by turning the Stadium through 90 degrees, developing over the existing TAVRA and BT sites, and demolishing the Empire Pool on the corner of Wood and Park streets to create an open plaza guaranteeing safe access and entrance for attending spectators.

– The Millennium Stadium hosts its first FAW International Football matches in the summer of 2000, Jari Litmanen of Finland scores the first goal at the venue, with Ryan Giggs providing the first Welsh goal in a 2-1 friendly defeat for Wales

– The Football League Cup Final, LDV Vans Trophy, FA Cup Final and FA Community Shield come to the Stadium in 2001; Liverpool beat Birmingham on penalties in February in the Worthington Cup Final, the first of the English football showpiece matches to be staged

– The FA Cup Final between Arsenal and Liverpool follows in May as the first FA Cup Final to be played in Cardiff, and confirming its status as a World Class venue the Stadium achieves a 5 Star UEFA rating, the Football League play-offs follow for the first time in June

– Millennium Stadium’s football pedigree continues to grow with a continental friendly between Barcelona and Parma in August 2004; Ronaldinho (later 2004 FIFA Player of nthe Year), Henrik Larsson, Luis Garcia and Andrés Iniesta are amongst the Catalan talent on display

– Developing the motorsport fuctionality of the Millennium Stadium on the back of Speedway and Supercross a Millennium Stadium stage of Wales Rally GB in the World Rally Championships takes place in December 2005; the venue also hosts the finish that year

– The 125th FA Cup Final in 2006 – a classic 3-3 and penalties between Liverpool and West Ham Utd – is the sixth and last FA Cup Final the Millennium Stadium hosts; the seventh and last Football League (Carling) Cup Final is hosted in 2007

Enter the Millennium Stadium and RWC 1999

– With construction work still to be done, a three-quarters complete Millennium Stadium hosts its very first match in June 1999 and Wales record their first-ever win over South Africa. Mark Taylor scores the opening try at the new venue

– The Rugby World Cup comes to the Cardiff Arms Park in 1991; Wales fail to reach the quarter finals
– Ian Rush scores the only goal in a famous 1-0 victory over the then World Champions West Germany
– Cardiff Arms Park hosts concerts including Tina Turner
– Boxing title fights come to the venue in the form of Lennox Lewis v Frank Bruno in 1993
– SWALEC Cup Final is the very last game at Wales’s National Ground in 1997
– Redevelopment begins for the Millennium Stadium in September 1997 after auctioning of parts of the old National Stadium

– Lord Bute donates the Park to the people of Cardiff
– Cricket is played from 1848
– Cardiff Rugby Club is formed in 1876
– First victory for Wales over Ireland in 1884
– Grand Stand opens 1885
– Grand Stand extension completed in 1890
– New pavilion opened for changing, indoor exercise and social functions